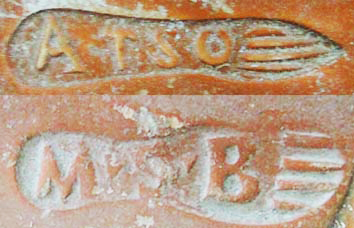 By invitation of Smiljan Gluščević, in June 2014 I could investigate some Italian sigillata stamps in the depository of the Arheološki musej Zadar, originating from the harbour at Zaton.

Within these, there are three identical stamps, well legible as A.T.SO in planta pedis. They are impressed on dishes Consp. 3.2 and derive from a north Italian production (TSTP).

Such a potter is not yet included in the OCK. There is listed only a single unattributable specimen as type 2858.152, coming from Budrio, on the floor of a plate, but described and drawn as AVT.SO. 1

Other examples, likewise on Consp. 3, were found at Iulia Concordia. 2

By comparing these stamps, apart from the three Croatian ones they do not seem to stem from the same die, because they all differ in the spacing of the letters, especially S and O. Whatever the V-shaped mark should mean or whether it is caused by a damaged die, is not yet determinable.

The second unknown potter, equally on a north Italian (TSTP) dish Consp. 3.2, is M.S.B in planta pedis. There is only one, but a very clear stamp within the material seen by me. 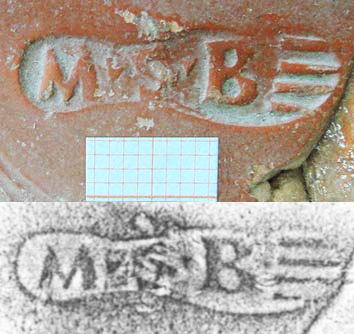 For that one I wasn’t able to find any parallel up to now. Presumably there will be a connection to the other Po Valley potters signing with the initials M.S., such as M.S.M, M.S.O, M.S.P, OCK 1757, 1758, 1760, respectively. (Other potters as M.S.FES OCK 1756 and M.S.SATV OCK 1761 definitively worked earlier than the aforementioned group.)

Has anybody already seen another specimen of such stamps and can tell me more about it?